So called mild (1.4 ATA or less) hyperbaric chambers continue to proliferate at a seemingly unprecedented rate. They do so on the strength of promoting wholly unproven and in many cases implausible benefits to the desperate, the gullible and the vain. Most commonly, these chambers are of a soft-walled inflatable design but there are hard-shelled low-pressure versions out there as well.

Inflatable hyperbaric chambers are approved by the FDA based on “substantially equivalent” to the air-filled Gamow (pronounced Gam-of) Bag, pictured below. And approval is limited to treatment of “Acute Mountain Sickness (AMS) and its associated mild symptoms”. Readily apparent upon the most cursory of internet searches is that this chamber type is proposed as treatment, and I use this term loosely as it is an undoubted exercise in futility, for anything but AMS. Multiple occupancy utilization is not uncommon, another FDA violation, and one company manufacturers a four-person capability. Mild hyperbaric chamber operators and users further violate FDA approval when incorporating an oxygen breathing system. 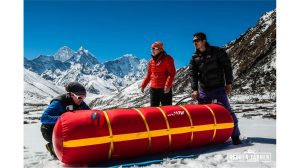 Following a recent and concerted educational effort, State and Local Fire Marshals have begun closing businesses promoting mild hyperbaric oxygen therapy due to non-compliance with NFPA 99 Chapter 14 standards. One affected commercial enterprise reacted by proposing that because their inflatable chambers offer therapeutic not medical services and represent a lower risk than traditional hyperbaric chambers, they should not be held accountable to current standards. Further, they proposed a new NFPA category be developed specific to this chamber type. I was one of two individuals who offered public statements against these proposals during a August 1 NFPA meeting. My comments are attached in the following Word file.

In the week prior to that meeting, the American Medical Association formally opposed the use of the mild hyperbaric therapy…see link.

Copyright © 2022. National Board of Diving and Hyperbaric Medical Technology. All rights reserved.

The National Board of Diving & Hyperbaric Medical Technology is a not-for-profit organization recognized as tax-exempt under the United States of America Internal Revenue Code section 501(c)(3) to ensure that the practice of diving medicine and hyperbaric oxygen therapy is supported by appropriately qualified technologists and nurses, through respective certification pathways. Funding is generated solely through certification fees and sales of Board merchandise. The National Board of Diving & Hyperbaric Medical Technology does not host or receive funding from advertisers or any other forms of business.

The information provided on this site is designed to support, not replace, the relationship that exists between visitors to this site and health care professionals.Any information collected by this site, such as e-mail address, will never be passed on to any third party, unless required by law.

Google Analytics is a webmaster tool used to determine the devices used to access this website so the content can be properly coded to serve phones, tablets or desktops. It is also used to determine the number of visitors to assess load on the server. It is used soley for this purpose and not configured in any way to track or individually identify the visitors themselves and should not concern the visitor in any way.